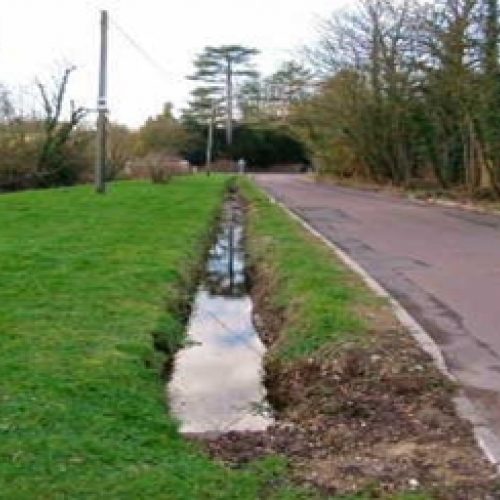 DITCHES EXPLAINED
The maintenance of rivers, streams and ditches is usually the responsibility of the
“Riparian Landowners” who own land on either bank. If you are such a landowner
you will have both rights and responsibilities associated with the ditches, or other
watercourses, flowing through or adjacent to your property. The EA has produced a
guide to the rights and responsibilities of riverside ownership called ‘Living on the
Edge’.
There are, however, some general rules which can be applied to ascertain
responsibility for ditch or watercourse maintenance. If you are a landowner, to
reduce the risk of flooding to neighbouring properties, the law requires that you
maintain your ditches and drains to prevent flooding. Failure to do so may result in a
legal liability for the damage that any resultant flooding may cause.
Watercourses and Ditches
The normal position in connection with who is responsible for the maintenance
of watercourses and ditches is shown in the illustrations below.
A watercourse is a natural feature which drains the surrounding catchment and
normally has some water flowing in it.
A ditch is a man-made feature which has been created in order to drain an area of
land. Historically these were normally dug by a landowner at the edge of their field
and the spoil deposited on their land, on which hedges grew over time. As a result,
the common law ‘hedge and ditch’ rule says the landowner responsible for
maintaining the ditch is normally the landowner on the hedge’s side of the ditch.
Highway Ditches
The common law ‘hedge and ditch’ rule has particular relevance in relation to ditches
running alongside highway which are normally the responsibility of the adjacent
landowner (see illustration below).
Ditches are not always shown on Ordnance Survey maps, however his does not
affect the legal presumption described below.
The principle in law is that where there is a ditch the highway boundary is the
roadside edge of the ditch, this applies if the ditch has been piped or infilled (by
natural erosion or otherwise). There are some limited exceptions.

As SODC can no longer put up notices on site for every planning application we have decided to publish them on this website instead. You can use the link to look up the application on-line and make your own comments direct to SODC

Look at applications
Get the latest newsletter